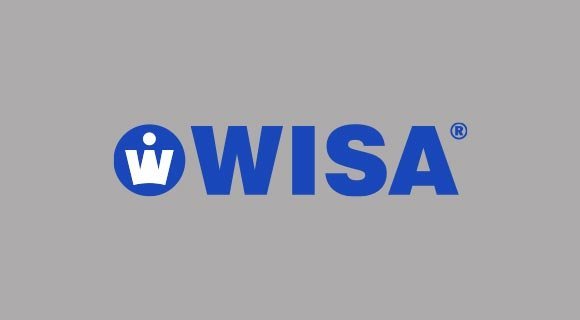 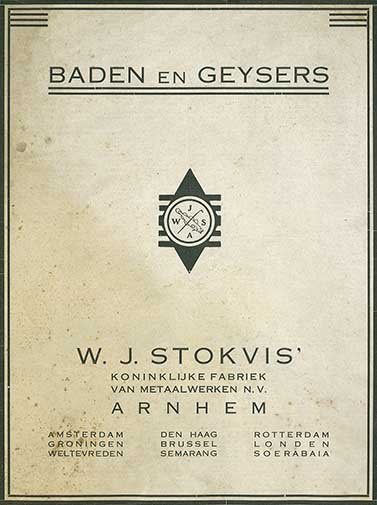 WISA has manufactured quality and innovative sanitary products  since 1865. With a rich history in flushing technology, we now offer a whole range of products, including flushing systems and accessories, ceramics and toilet seats and a wellness programme. From our sales offices in the Netherlands and Germany and our separate export department, we supply quality and innovative sanitary products worldwide.

To mark our 150 years in the industry, we have used the available  material to chart the DNA of WISA. 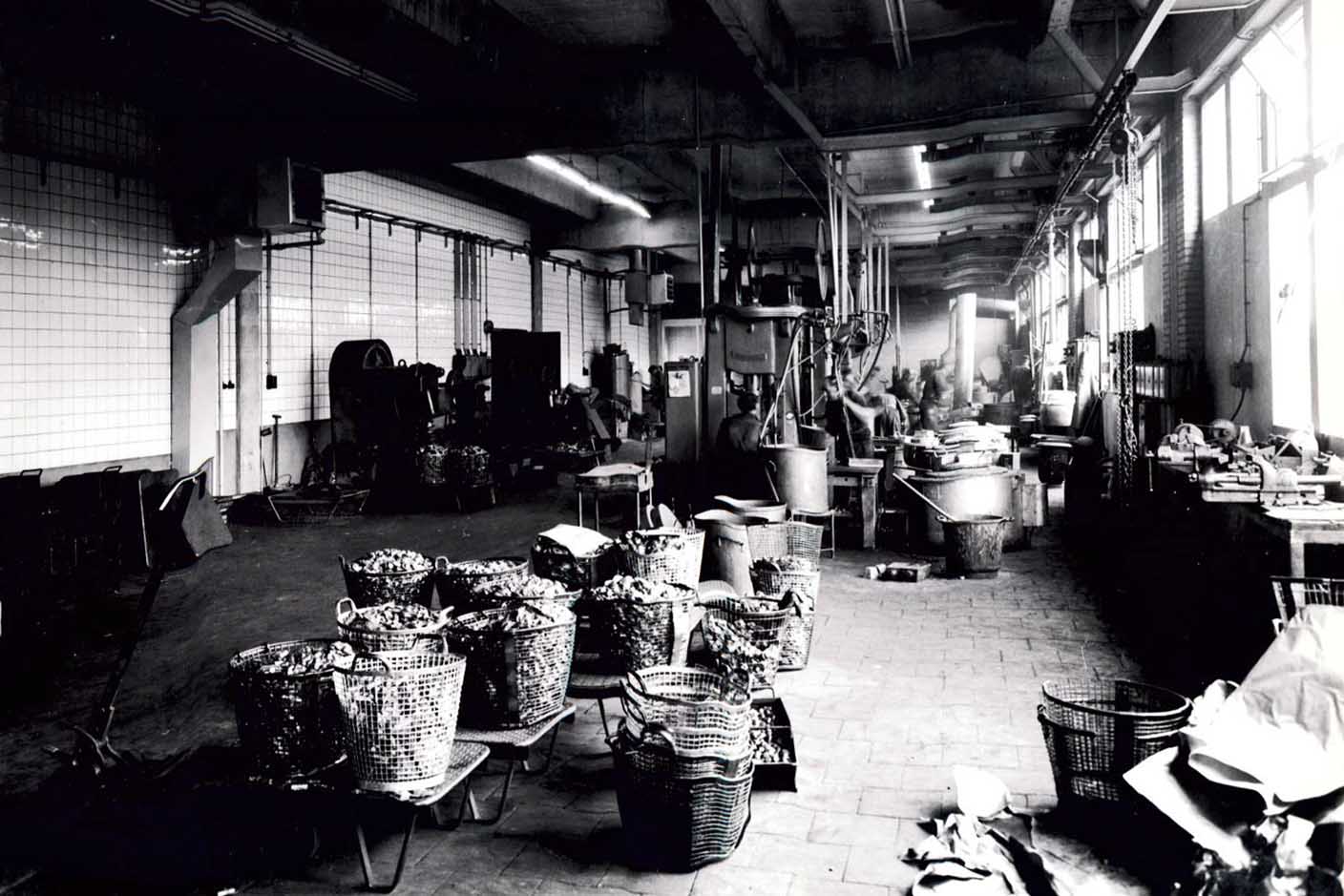 HOW IT ALL STARTED

On 23 March 1840, Wolf Joseph Stokvis was born in Rotterdam. In 1865 he founded the W.J. Stokvis Metalware Factory in Arnhem. The company was later renamed WISA. Stokvis was a strong leader and a very hard worker, the true entrepreneur. At the age of 84, he was still an active board member on a daily basis.

By founding the metalware factory, Stokvis laid the foundation for a company that would play an active role in water management in Western Europe.
The business was prosperous and the first property was purchased on Oude Kraan in Arnhem in 1873. This was followed by many expansions. 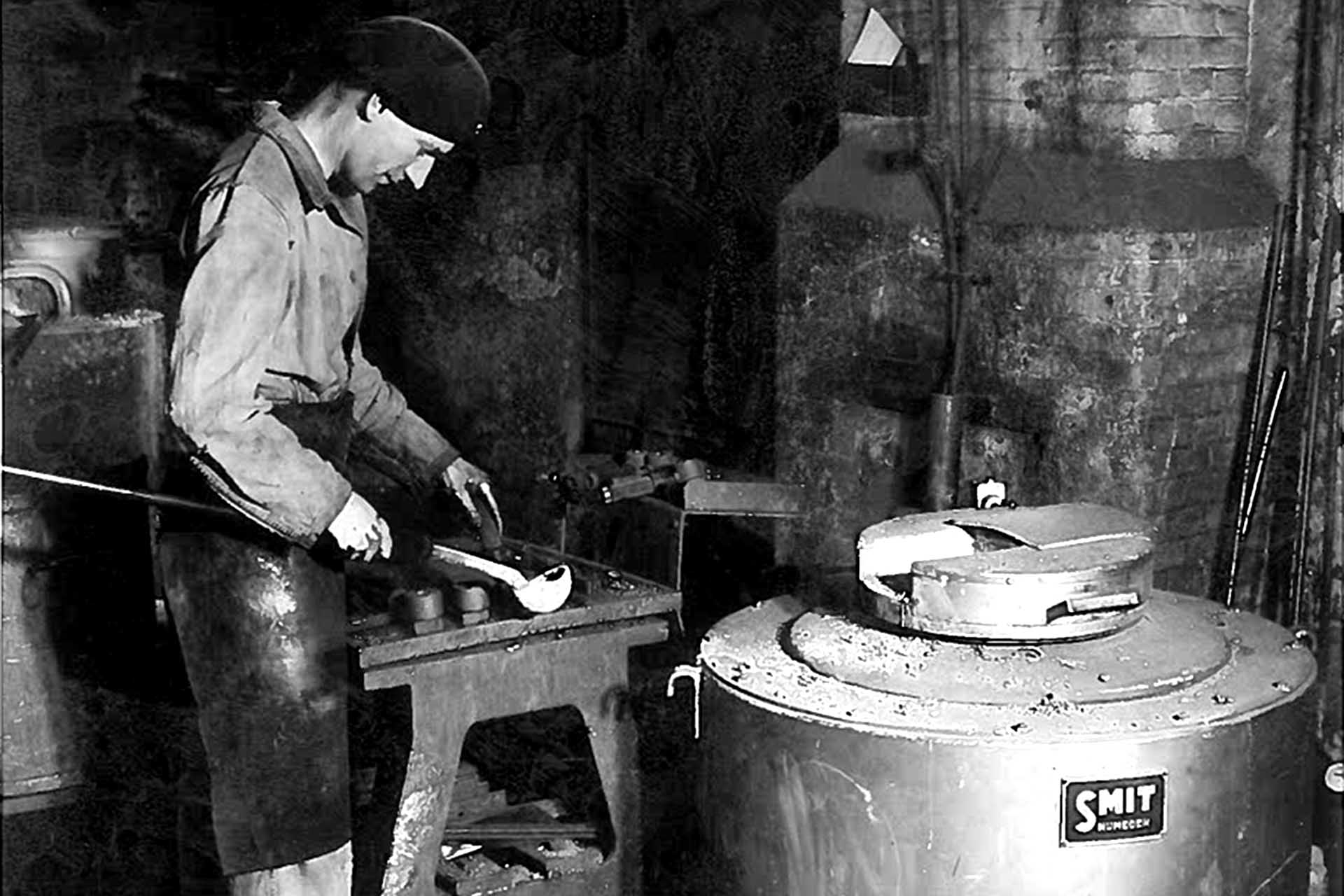 A WIDE RANGE OF PRODUCTS

From the very beginning, the metalware factory developed and manufactured a range of products varying from taps and lamps to gas heaters. Later, development and manufacturing focused more on products for water management, mostly based on designs by son Philip.

What do water management and cars have in common?

W.J. Stokvis, of course! Besides manufacturing sanitary products, gas heaters and light fittings, the Metalware Factory also played an important role in the early years of the Dutch car trade. W.J. Stokvis was a well-known importer of cars, with a national network of sales agents. The firm managed dealerships that included the brand names Daimler, Panhard, Levassor, Dion Voiturettes and Clément-Bayard. In addition to cars, it also traded in car tyres and related parts and bicycles, for example of the brands Centaur, Humber and Swift. 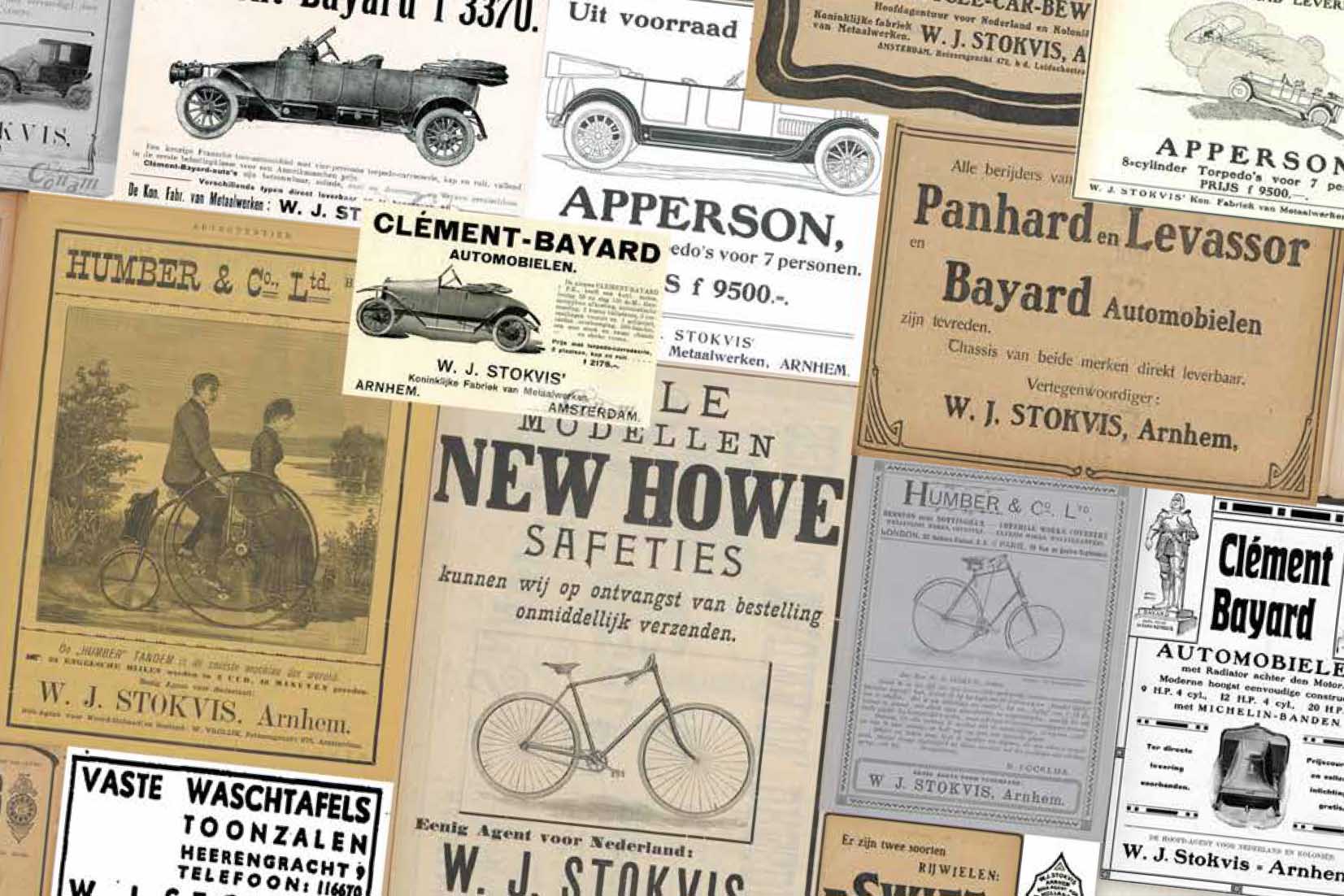 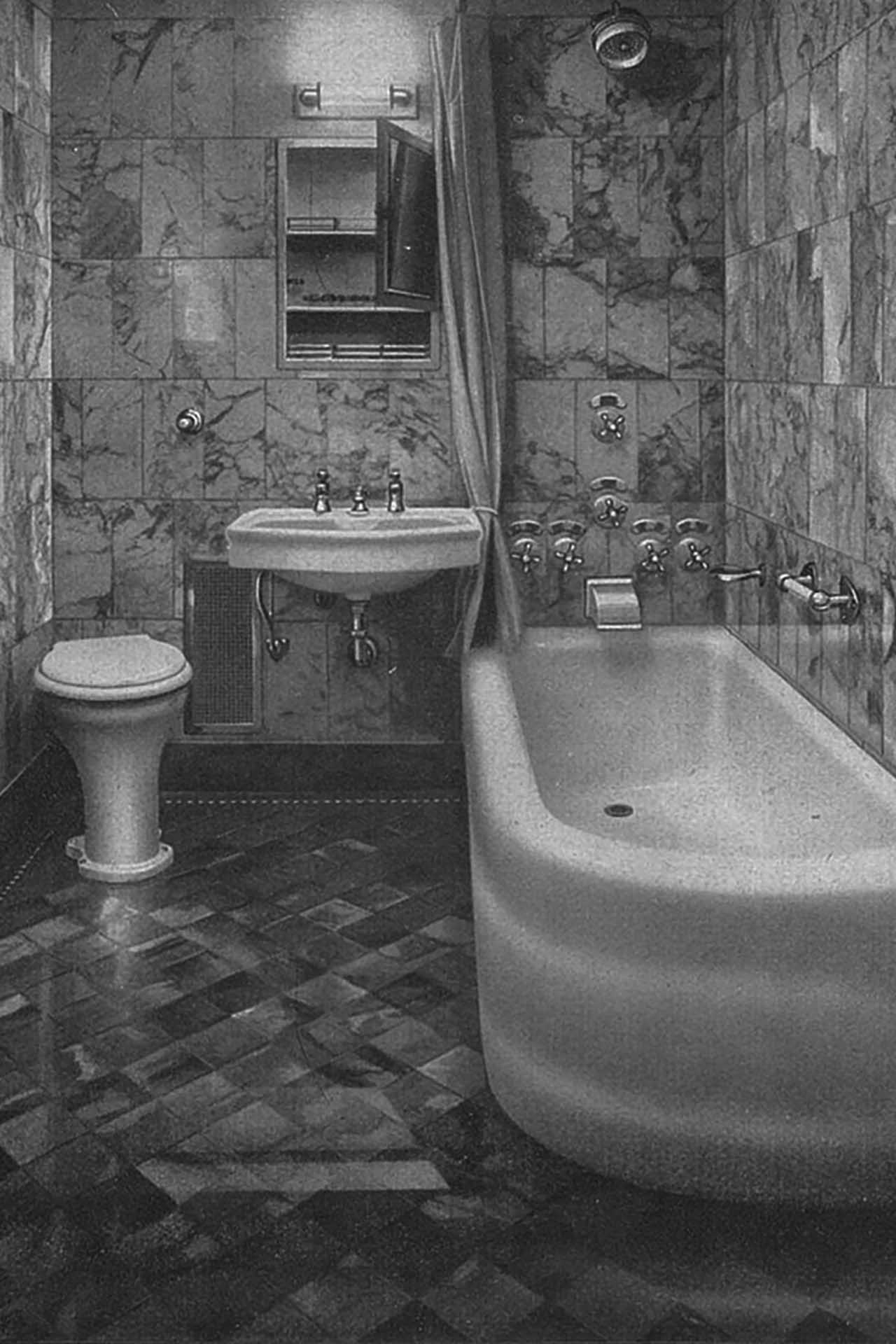 THE GREAT STOFFELS DESIGNS FOR WISA

In 1906 Stokvis took on decorative artist J.C. Stoffels as full-time designer. Until 1936 he created electrical lighting with a modern design in the style of “‘t Binnenhuis” and “Amstelhoek” furniture as well as copper and brass articles in historical styles.
These include the “Old Dutch Lamps” series of 1910. Stoffels also designed stands for the company at national and international exhibitions and designed print work, such as advertisements, brochures and catalogues. To this day, Stoffels’s work can be found in many national museums. His attention to the combination of design and function were highly praised.

On Tuesday, 23 April 1912, Her Majesty Queen Wilhelmina and His Royal Highness Prince Hendrik honoured Arnhem with an official visit. The royal couple drove through the working class neighbourhood of Klarendal before visiting the children’s hospital, the St. Eusebius Church and the WISA factory.
After the official visit, the Royal Warrant was awarded. A notification from the royal household appeared in various national daily newspapers. Sixteen years later, on 24 August 1928, the oldest director of the W.J. Stokvis company, Philip Stokvis, also received a royal honour. Both the Royal Warrant and the honour were literally and figuratively the crown on WISA’s pioneering work. 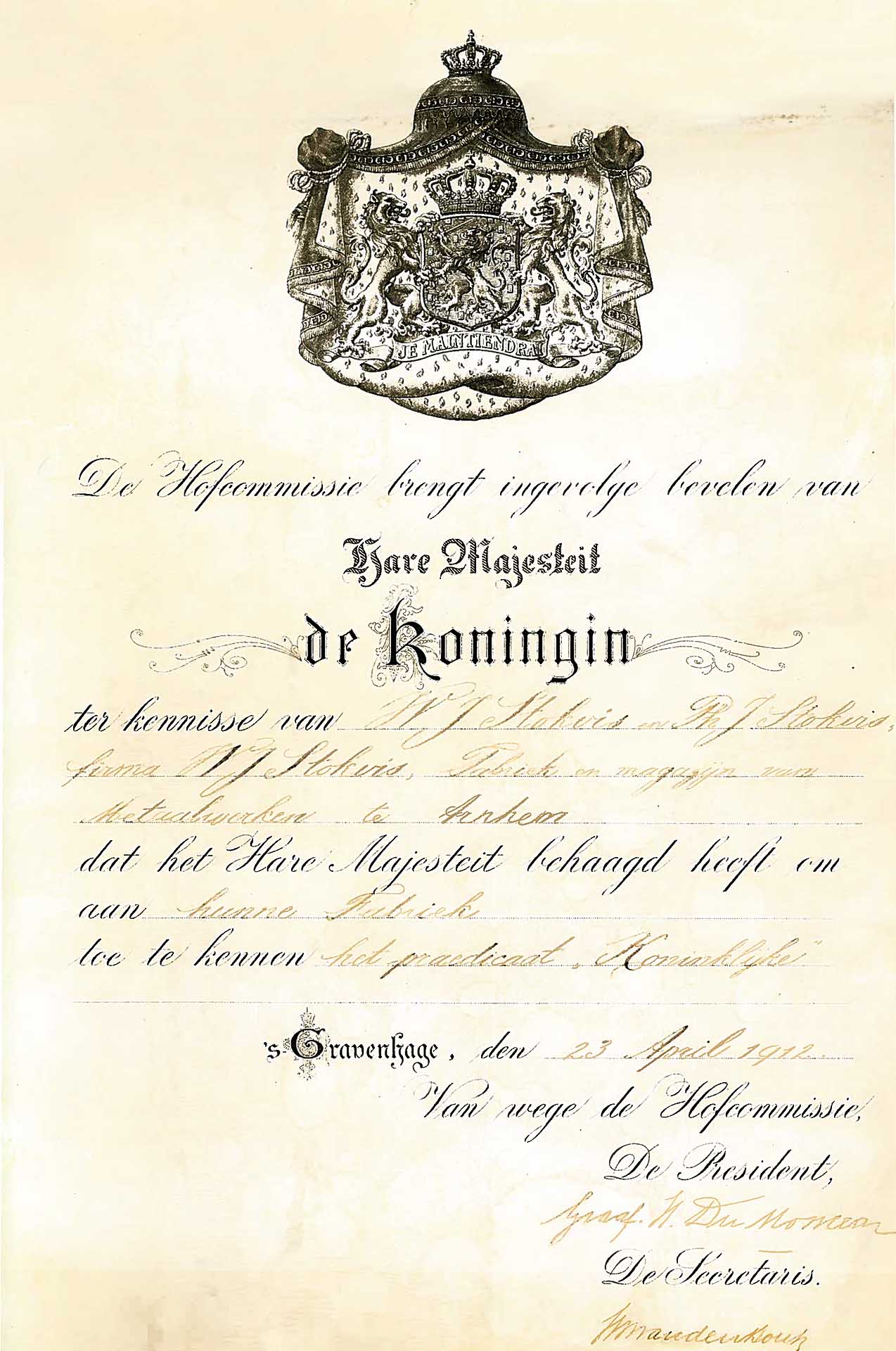 Representatives and agents had been active in the most important cities in the Netherlands, but also abroad, since 1912. Besides their sales activities, they also played a stockkeeping role. The Metalware Factory had five branches in Arnhem, as well as branches in Amsterdam, The Hague, Groningen, Rotterdam, Nijmegen, Brussels, London, Paris, Surabaya, Semarang and Jakarta. As such, WISA could already rightly call itself a world player!

On 1 January 1915, WISA celebrated its 50th anniversary. This was a period in which WISA flourished and could proudly call itself an important Dutch manufacturer and employer. During World War I (1914-1918), the machine factory operated at full
capacity.
To mark the company’s 50th anniversary, a well-attended reception was held in the headquarters on Oude Kraan in Arnhem on 3 January 1915. Guests included the mayor of Arnhem and the Baron and Baroness Van Heemstra. 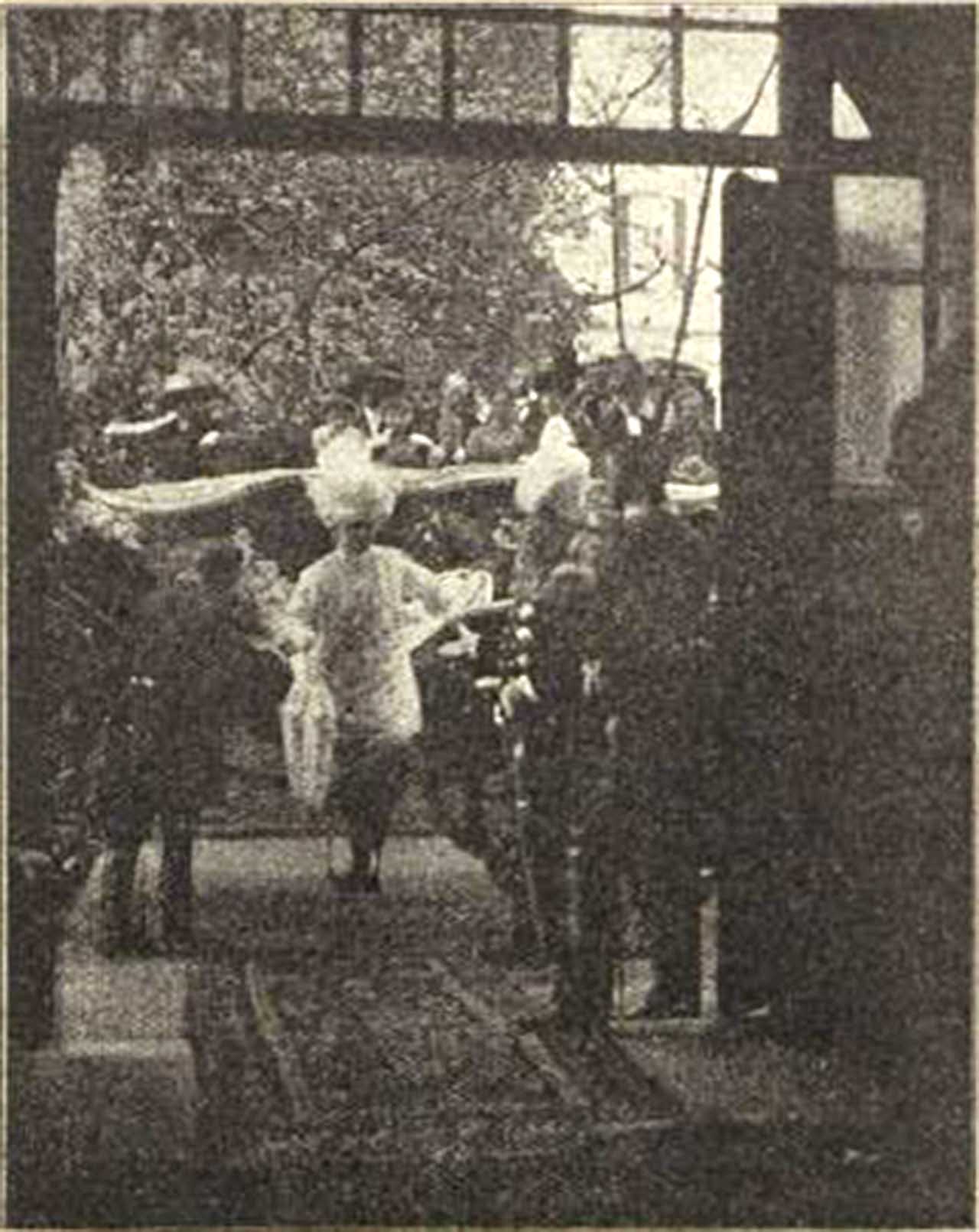 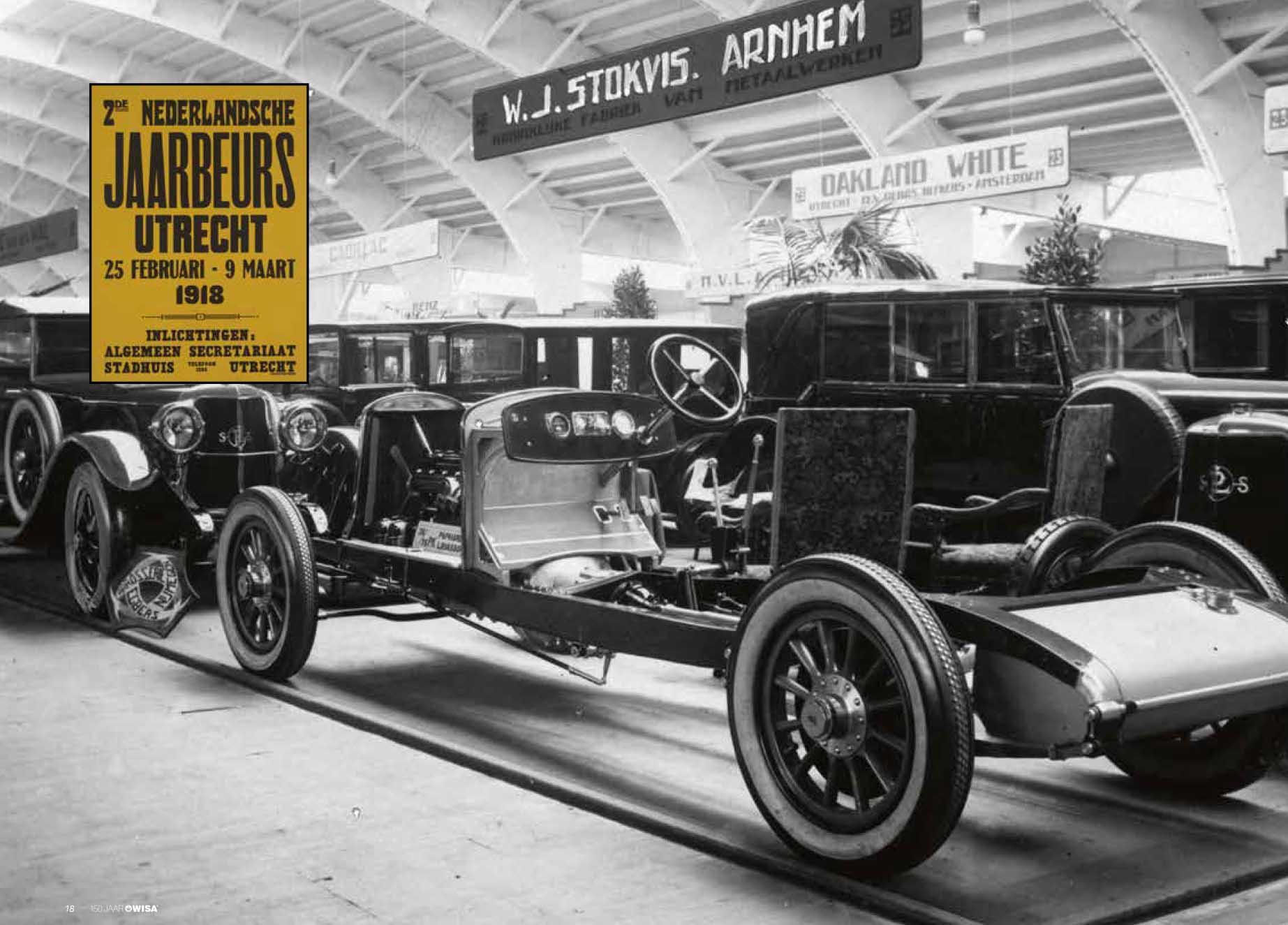 Long before it became common for larger companies to engage advertising agencies, Stokvis realised the importance of positioning to distinguish himself from
his competitors. Cornelis Stoffels’s designs effectively ensured that the Stokvis company had a prominent presence.

Mr Van der Voort, then director of WISA, organised annual exhibitions to display the various WISA articles. People could admire the beautiful copper lamps, Dutch style ornaments modelled after the paintings of Jan van Eyck, Gerard der Borch, Frans van Mieris, Gabriël Metsu and in particular the painter and smith Quinten Massijs. Photos of these paintings show how meticulously these lamps were reproduced. There were also beautiful models of French lamps. Of course, washbasins and sanitary articles with the latest innovations were also displayed.

Besides displaying at exhibitions, Philip Stokvis also gave lectures. In 1925, for example, he gave a lecture with dia slides in the “Heerenlogement” at the Keizersgracht about “Artificial light in art”. He also gave a presentation about the history of the lamp in the Art Society building. In this unique way, he was able to build
WISA’s innovative reputation.

The showrooms of furniture factories in the Netherlands were used to exhibit a special collection of lighting ornaments. A partnership was entered into with the J.A. Huizinga company so that people could see WISA products in a suitable interior setting. This was a very pioneering initiative at that time! The Huizinga showrooms played an important role in spreading the New Art and promoting modern design in the Netherlands. Huizinga attracted young designers for this purpose. Huizinga and WISA complemented each other perfectly. 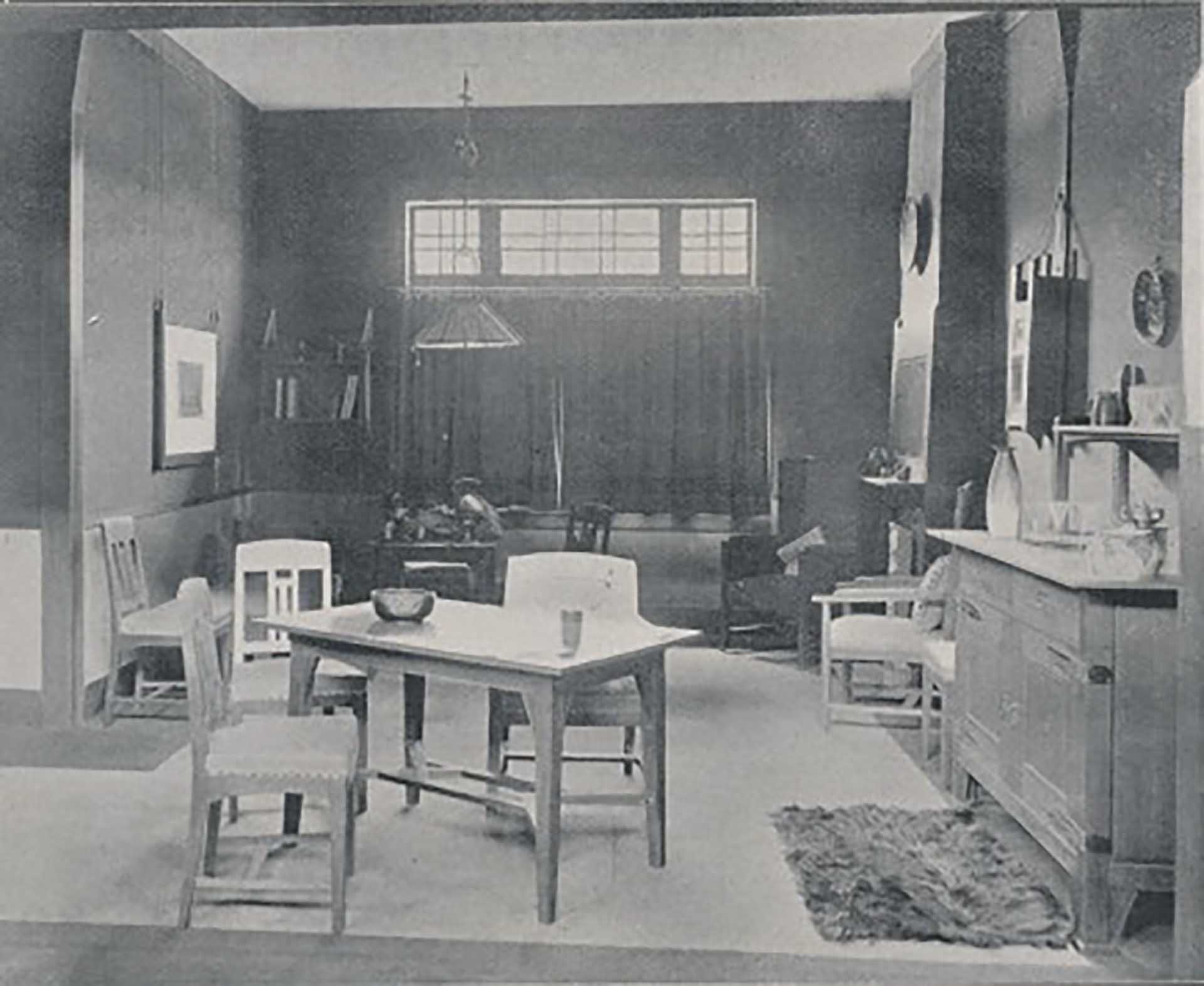 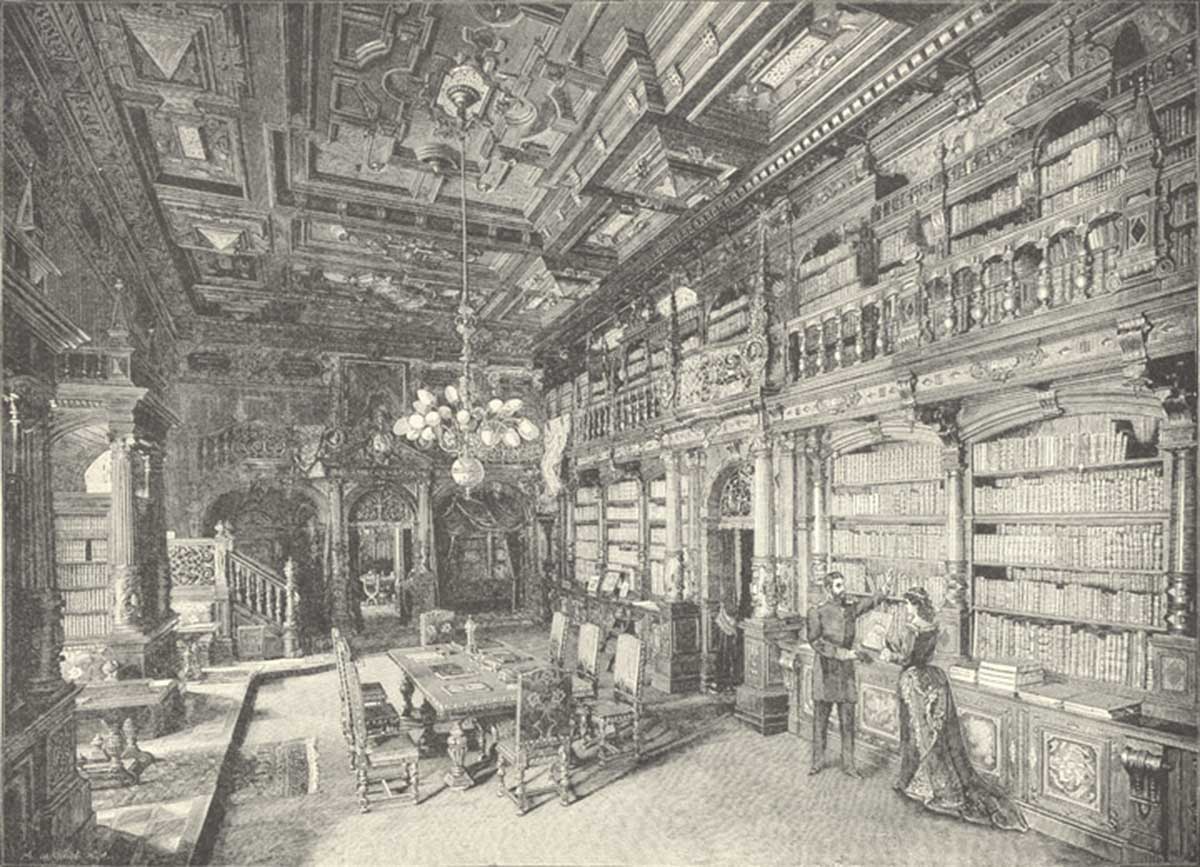 ROYAL ACROSS THE BORDER

Philip Stokvis personally made sure that the good name of the company was established around the globe. For example, he travelled as a member of a Dutch delegation on the “Marnix van St. Aldegonde” motor vessel to the Dutch East Indies to strengthen ties with the local trade union movement. The Royal Warrant played a hugely important role in this task. In 1927 everyone was delighted when Her Majesty the Queen granted the Dutch East Indies Department in Surabaya permission to use the “Royal” designation as well.

WISA had some fairly influential international clients, including several European monarchs. For example, WISA supplied a number of bronze electric chandeliers to the Imperial Palace in Vienna. In Romania, people were also familiar with the reputation of the Dutch manufacturer. WISA was commissioned to manufacture electric chandeliers for the Queen’s Palace in Sinaia, where Carmen Sylva spent most of the year.

During World War II, our factories continued to operate as usual. Despite receiving quite a few orders, the firm’s net profit fell as a result of falling revenues and rising costs.
The factory on Oude Kraan in Arnhem suffered severe damage in the war, but continued to operate here for many years after the war. 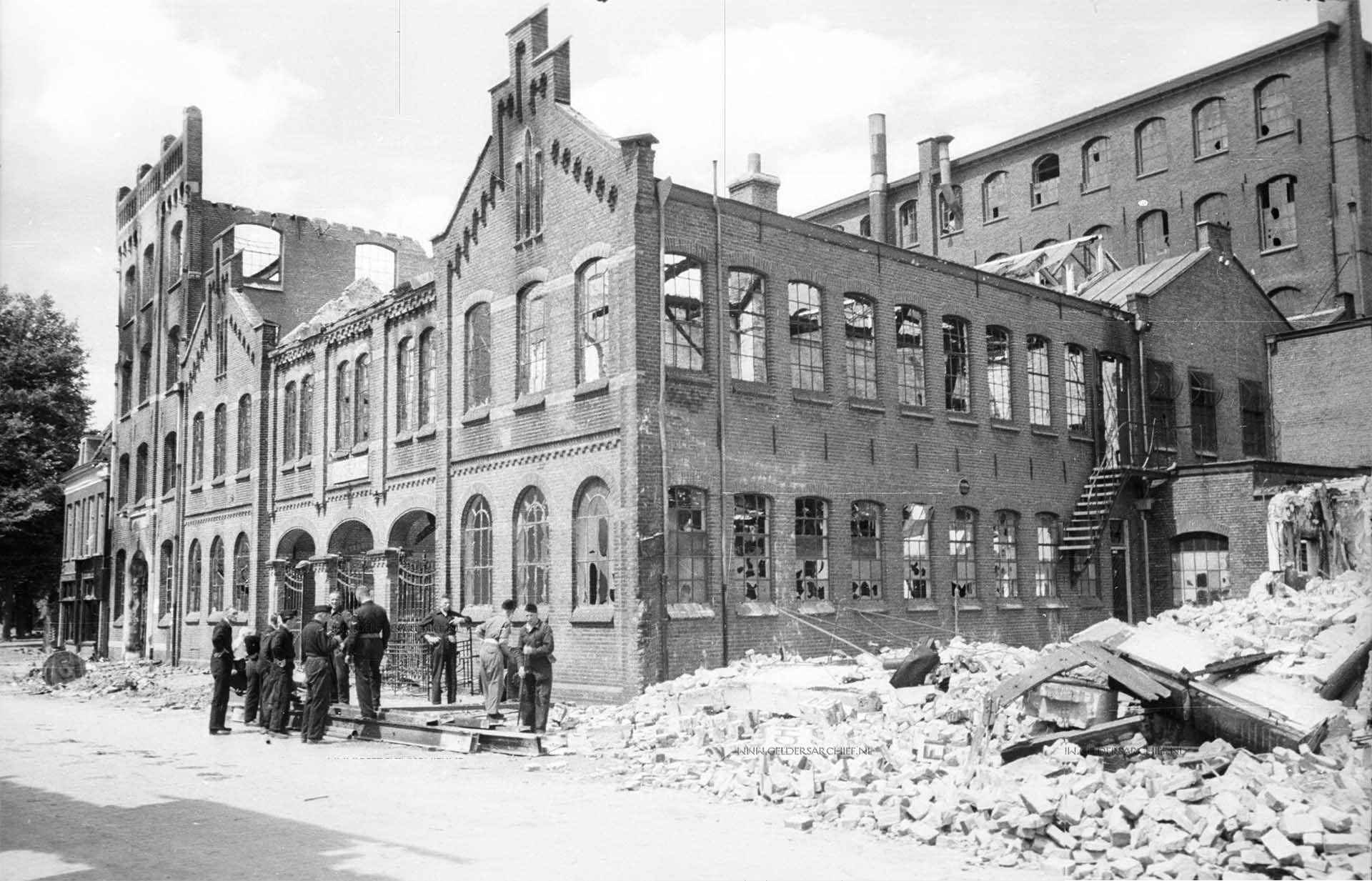 When Royal Metalware Factory W.J. Stokvis N.V. celebrated its eightieth birthday, the board of directors gave the office staff a premium-free retirement, widows’ and orphans’ pension and a gratification. The workmen received an extra week’s wage. 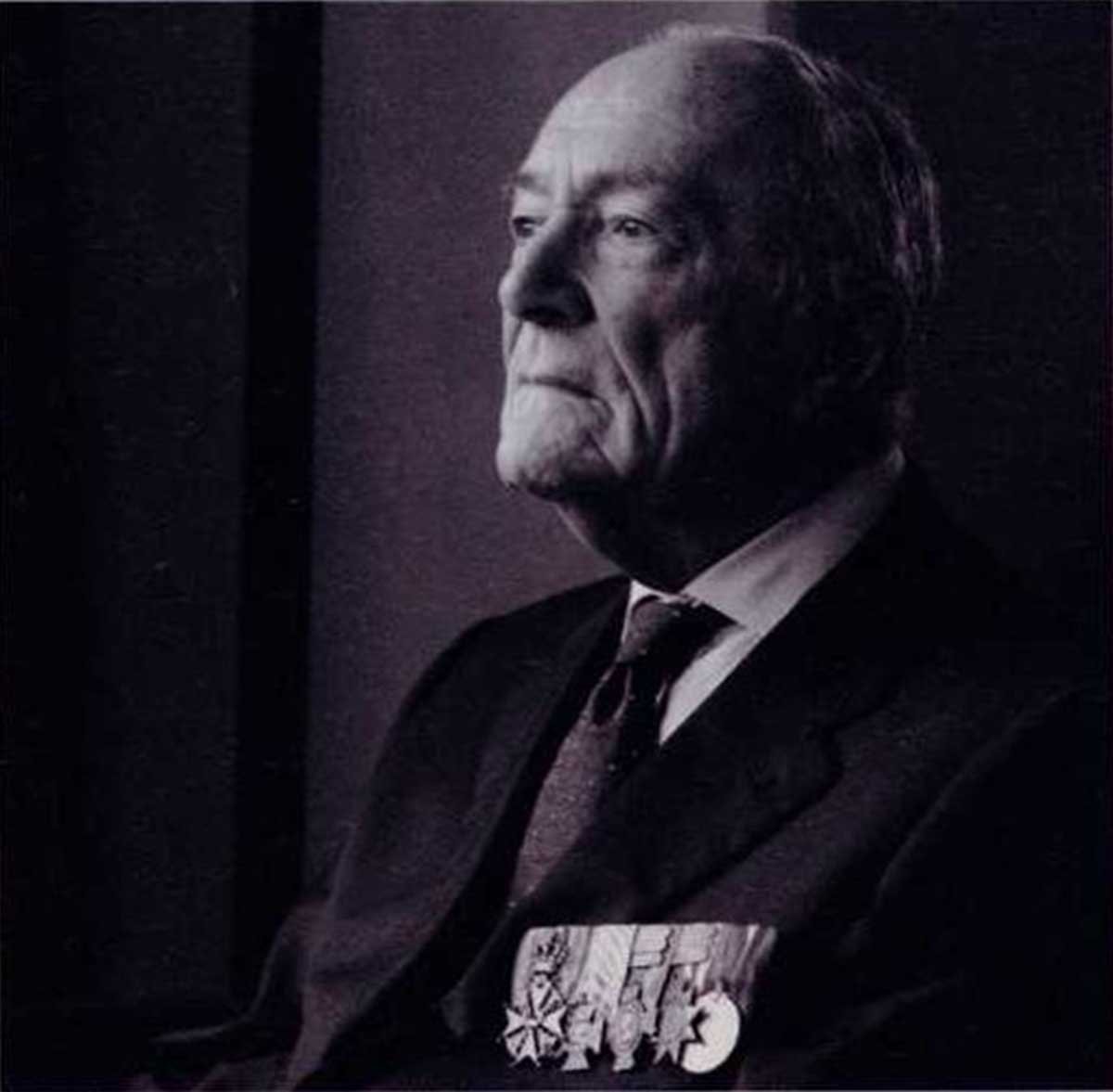 In 1950 Mr Den Ouden became the director of WISA. He eventually became the oldest recipient of the Military William Order, the highest military award in the Netherlands. In 1942, while still in his twenties, he was a lieutenant pilot and defended the Dutch East Indies colony from the invading Japanese army. His heroic actions during this period earned him the award.
< Mr Den Ouden, oldest recipient of the Military William Order

THE NINETEEN FIFTIES FROM METAL TO
PLASTICS SPECIALIST

In the early 1950s, the importance and use of plastics rapidly increased. Traditional materials such as iron, lead and brass used to manufacture plumbing products and parts for sanitary installations were increasingly replaced by modern plastics.
Mr Den Ouden, then director, was an innovative force and actively responded to this change. He introduced plastics, whereby WISA became a specialist in professional-technical plastic products for industrial and domestic applications. 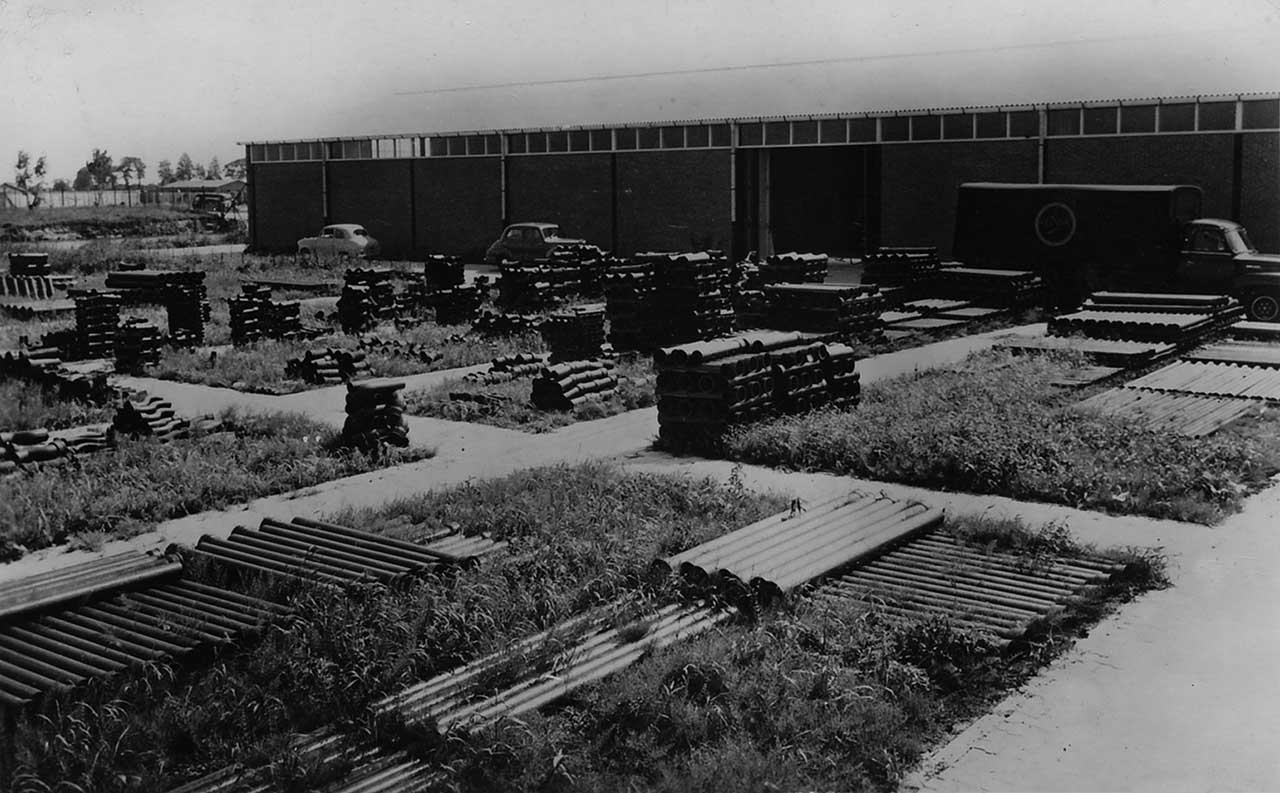 In 1955, three companies, i.e. Bolte & Gorter N.V. in Groningen, N.V. IJzerhandel
Gebr. Van Campen in Nijmegen and W.J. Stokvis Royal Metalware Factory N.V. in Arnhem, decided to join forces. Together, they founded the Vihamij company, which stands for Verenigde Industrie en Handelsmaatschappij (United Industrial and Trading Company). Its shares were issued in consideration for the shares of the three companies. 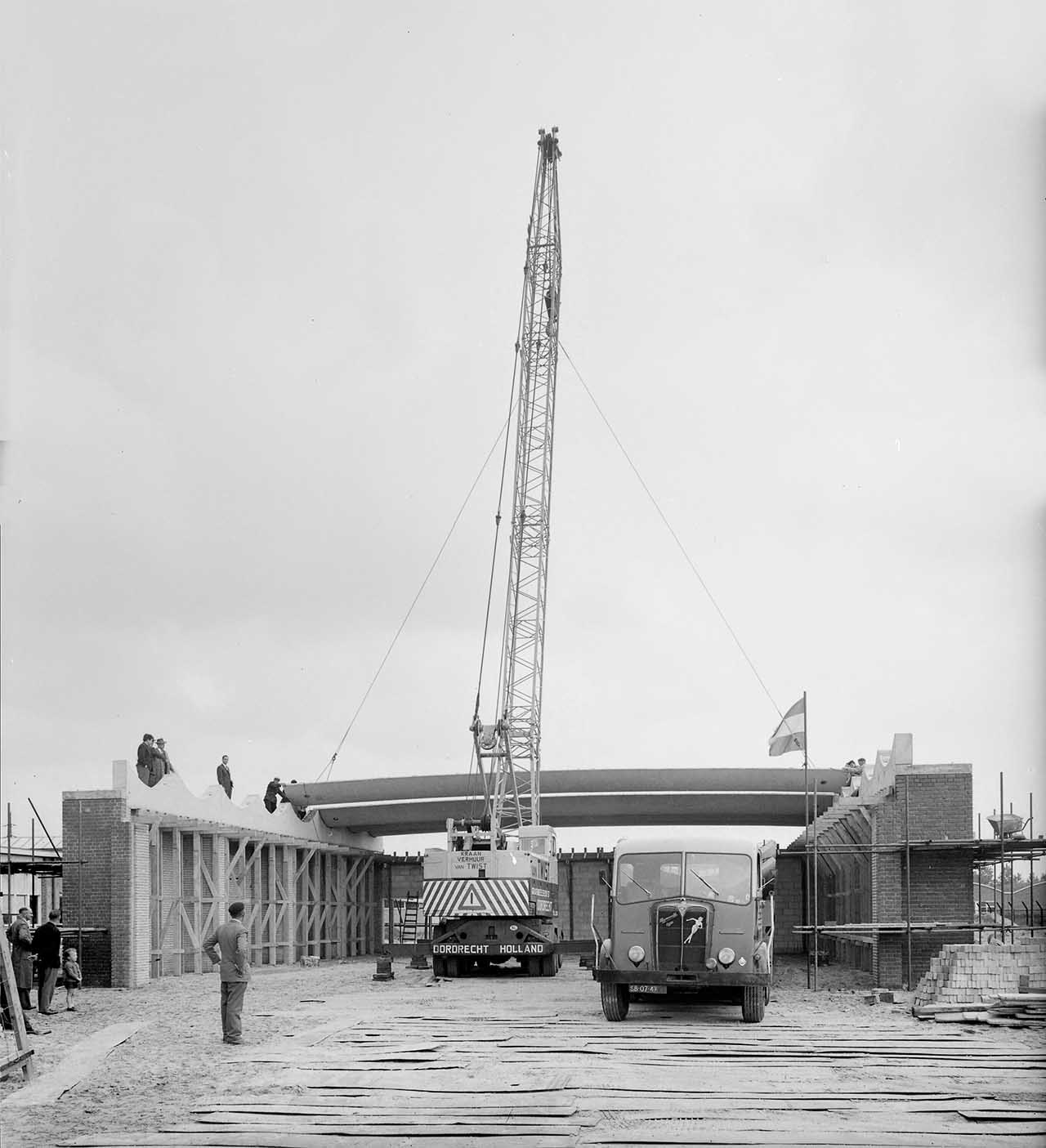 In 1957 the first stone was laid for the current WISA office and factory at Driepoortenweg 5. In 1962 the Municipality of Arnhem granted planning permission to enable the factory to further expand. WISA owned land and buildings at several locations in Arnhem: Rijnkade, Oude Kraan, Vijfzinnenstraat, Vossenstraat and Driepoortenweg.

FROM FACTORY TO POP PODIUM

In the late 1960s, a former WISA factory was transformed into the Stokvishal, a music venue and youth centre that existed until 1983. Well-known Dutch bands played in the Stokvishal, including Herman Brood, Normaal, Doe Maar and Golden Earring. However, it also hosted big international names like U2, Sex Pistols, UB40, Iggy Pop, Madness, The Clash, Blondie, Motorhead, Simple Minds and many others. 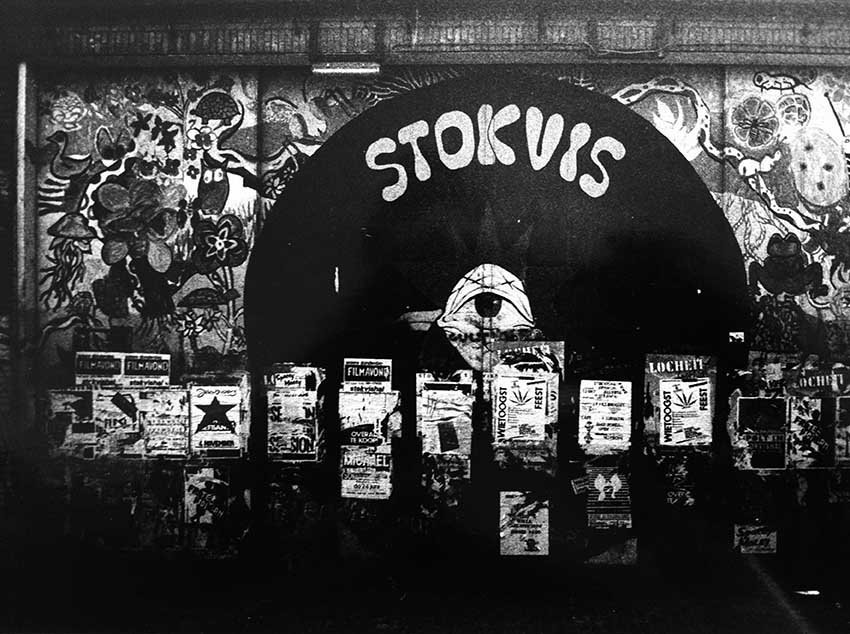 From early on, it was decided to change the initials of the founder and company namesake from W.J.S.A. to WISA. The WISA trademark was the company name from that point onwards. Over the years, the logo continued to be adapted to the times. The designers of the current logo have incorporated the royal W within the design in a modern way. 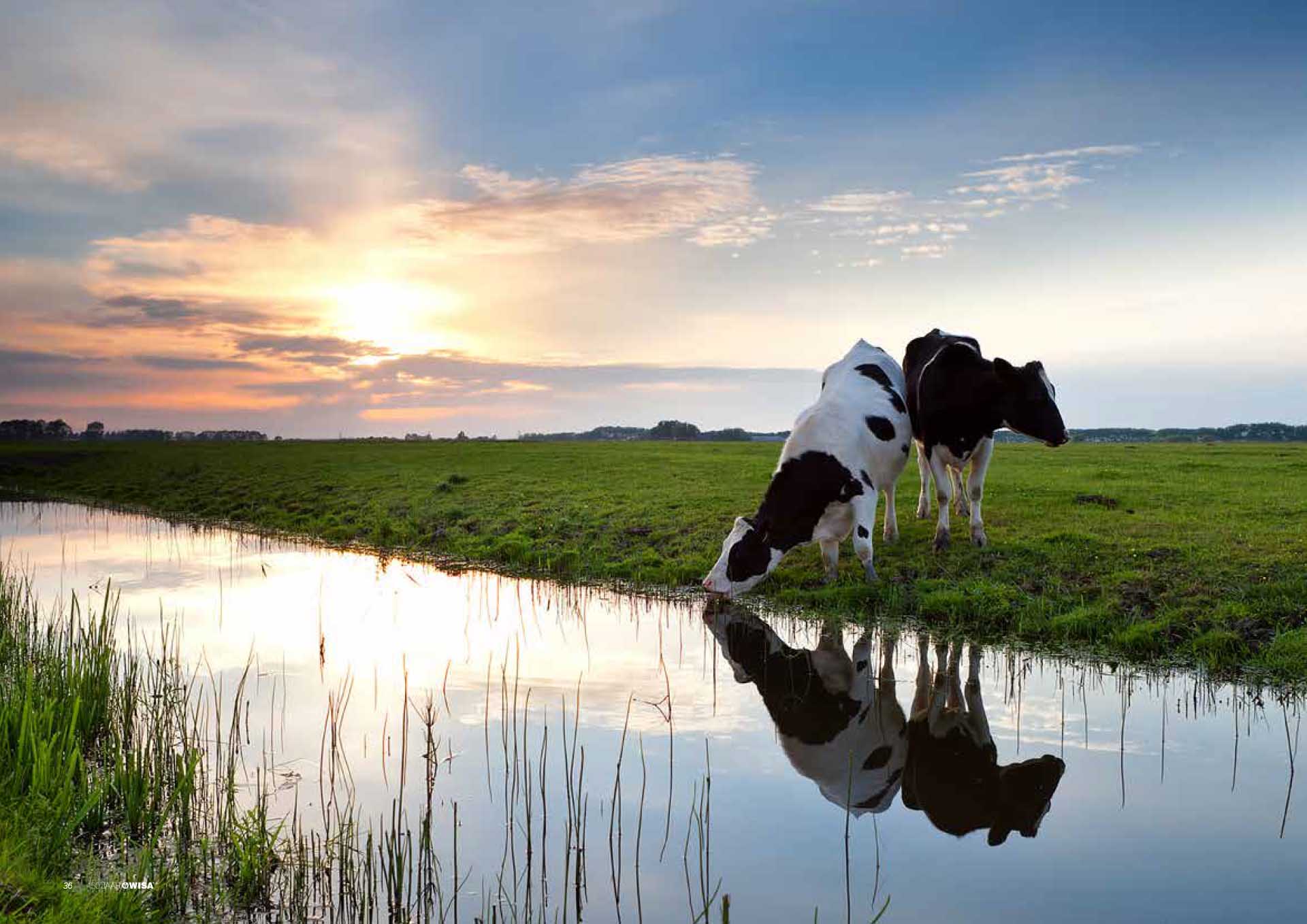 WISA BACK IN DUTCH HANDS

A company with such a rich history and traditional Dutch roots belongs in the Netherlands. So after years of mergers and acquisitions with national and international parties, WISA was pleased to be an independent company in Dutch hands again since June 2010. A lot had preceded this move:

1968 Merger of WISA and Simmonds Precision in Brummen

Due to the global crisis that had severely curtailed WISA’s exports and thus its sales, WISA decided to merge with Simmonds Precision.

The Dutch management of Simmonds carried out a management buyout. After several successful years expanding the company further, it sold WISA to Sphinx. This company wanted to use the acquisition to offer the bathroom market a total concept with both ceramics and sanitary plastic products.

1999 Sold to the Australian GWA

Sphinx sold WISA to the listed GWA and shortly afterwards was itself taken over by the Finnish company Sanitec.

The management, Hans Uijt de Haag, Eduard de Kleine and Mark Grosfeld (managing director since 2003) acquired WISA from GWA. It was as if the company had come home.

In the current ownership situation, WISA has more options for research and development. WISA is also better able to align production with specific local market needs. Furthermore, Mark Grosfeld emphasises that WISA strongly believes in keeping the Netherlands its base, also for exports, and having both R&D and production based at home.

WISA is typically Dutch and we are proud of that. After more than 100 years, production is still based in Arnhem. By continuously investing in local knowledge, production resources, moulds and efficient production processes, we have managed to make ourselves competitive in the Netherlands for customers worldwide. Obviously WISA is totally committed to keeping jobs in the Netherlands. 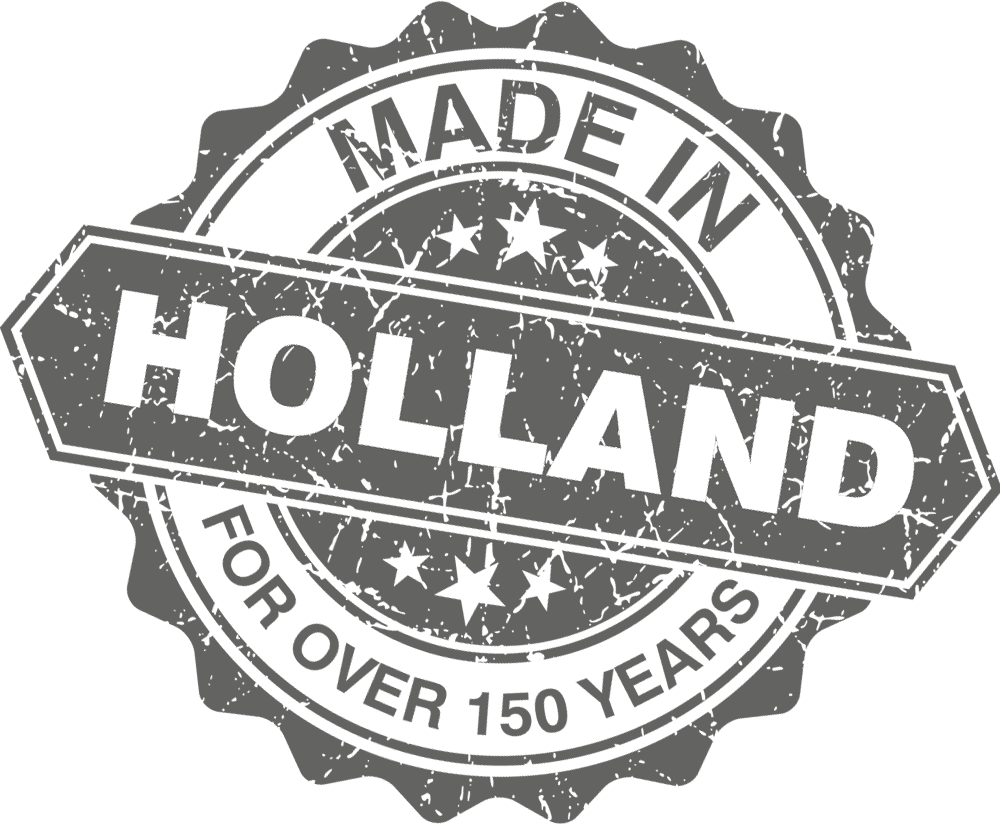 Part of the Fluidmaster family

Under the current management which acquired WISA after a management buy-out in 2010, the company has seen substantial growth, not only in The Netherlands, but also abroad. WISA was able to strengthen its position as a producer of high quality and innovative toilet systems over the last years. According to the management increase in scale was essential to take the next step.

With Fluidmaster as the world’s largest manufacturer of components and accessories for toilet systems acquiring WISA, we expect to create a substantial synergy and further improvement of our service and value to our customers in The Netherlands, Europe, and the rest of the world.

This Modal is powered by moori Foundation